Some very sad news today, and a serious blow to those who try to investigate the UFO phenomenon with an open mind, as it has been reported that Edgar Mitchell, Apollo 14 astronaut and 6th person to walk on the moon, has died. He was 85.

Mitchell was wan outspoken UFO enthusiast, and claimed many times that people in very high positions in the U.S government (as well as other world leaders) had contacted him and spoke to him of alleged UFO or alien cover-ups. Mitchell believed that incidents such as the UFO crash at Roswell were real, as he stated that he had heard accounts from witnesses first-hand. 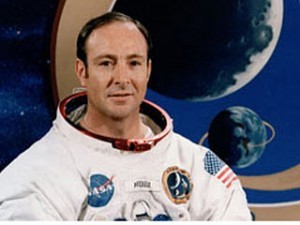 Edgar Mitchell, one of just 12 human beings who walked on the moon, has died, according to his ex-wife, Anita Mitchell.

“On behalf of the entire NASA family, I would like to express my condolences to the family and friends of NASA astronaut Edgar Mitchell,” NASA Administrator Charles Bolden said in a statement.

“He believed in exploration, having been drawn to NASA by President Kennedy’s call to send humans to the moon. He is one of the pioneers in space exploration on whose shoulders we now stand.”

Mitchell died Thursday in West Palm Beach, Florida,according to NASA. His death occurred on the eve of the 45th anniversary of his lunar landing, which took place on February 5, 1971.

Mitchell, Alan Shepard and Stuart Roosa were the crew of Apollo 14, which launched on January 31, 1971. Mitchell became the sixth man to walk on the lunar surface.

He and Shepard set foot on the moon two separate times during their mission, spending more than nine hours collecting rocks, taking measurements and (in Shepard’s case) hitting a pair of golf balls. Mitchell also took a famous photograph of Shepard standing next to an American flag. All told, the two spent 33 hours on the moon.

Mitchell, who was the lunar module pilot, found the trip to be a profound experience.

“Looking at Earth from space and seeing it was a planet in isolation … that was an experience of ecstasy, realizing that every molecule in our bodies is a system of matter created from a star hanging in space,” Mitchell told the UK Telegraph in 2014. “The experience I had was called Samadhi in the ancient Sanskrit, a feeling of overwhelming joy at seeing the Earth from that perspective.”

Fascinated and frustrated by the relationship between religion and science, he was very public about seeking links between the known and unknown.

He said he had conducted ESP experiments on the mission. He was also a believer in extraterrestrial activity, and was convinced UFOs had visited Earth.

In one interview, he told Bloomberg Business that the 1947 Roswell incident, which to some people is evidence of an extraterrestrial crash landing, was covered up. (The U.S. government has said the incident involved the crash of a high-altitude balloon.)

“It’s not just military. It’s a cabal of organizations primarily for a profit motive,” he told the publication.

However, he drew the line when it came to an interview with the UK Mirror. The newspaper claimed Mitchell said UFOs had helped prevent nuclear war.

“None of those statements were originated by me,” he told the Huffington Post. (The Mirror stood by its story.)

Mitchell also created the Institute of Noetic Sciences to research paranormal phenomena and consciousness. In addition, he was co-founder of the Association of Space Explorers, an organization for space travelers.

The astronaut was born in Hereford, Texas, in 1930. A Navy pilot, he joined NASA in 1966 as part of the agency’s astronaut corps. He was well-qualified: besides having served as a test pilot and college instructor, he earned a doctorate from MIT in aeronautics and astronautics.

Mitchell was part of the support crew for the Apollo 9 and Apollo 10 missions. A year after Apollo 14, in 1972, he left NASA to embark on his other activities.

He was in the news in 2011 when, threatened with a lawsuit from the U.S. government, he returned a camera he’d kept as a memento of the mission. NASA agreed to display the camera at the National Air and Space Museum.

Many have talked of their missions with joy and wonder. Mitchell went beyond, however: he believed we were all connected — to everything.

“We are not alone in the universe,” he told the Utica Phoenix. “We are just one grain of sand on a huge beach.”

Mitchell obviously had great credentials, as one of the handful of human beings to have been to space, and an even smaller group to have walked on the moon. He was level-headed, proudly stating his beliefs but never saying with 100% certainty that he knew them to be true. In a field usually dominated by hoaxes, people too eager to believe, and other assorted crackpots, having a respected NASA astronaut bring attention to the field was a breath of fresh air. He will definitely be missed.